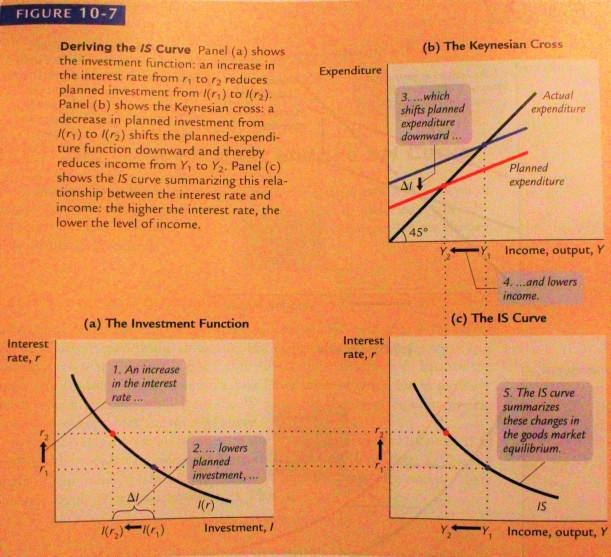 The LM curve represents a “[positive] relationship between the interest rate and the level of income (while holding the price level fixed) that arises in the market for real money balances.” (Mankiw, 2010) LM stands for liquidity and money, in which the rate of interest can influence investment and demand for money. LM curve represents the supply and demand for money, and LM shocks are also exogenous changes only now for the demand of money. An LM shock could be a change in a change in reserve requirements, a change in accessibility to banks/ATMs.

This model assumes greater income greater spending, equals greater money demand: (M / P)d = L(r, Y). “The quantity of real money balances demanded is negatively related to the interest rate and positively related to income.” (Mankiw, 2010) Higher income also leads, in this model to higher interest rates and shifts the money demand curve to the right. “The higher the level of income, the higher the demand for real money balances, and the higher the equilibrium.” (Mankiw, 2010) Therefore, the LM curve slopes upward. 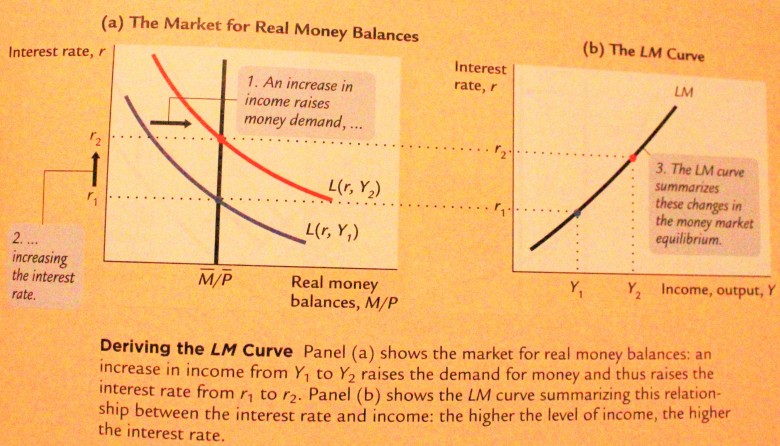 Which are then put together to get the IS-LM model. The two equations of the model are Y = C(Y – T) + I(r) + G or IS curve and then the M/P = L(r, Y) the LM curve. IS and LM are both effected by the rate of interest, of which alters investment and money demand. By now it might be clear that this model assumes a level of control that economists can use to manipulate through three exogenous variables: government spending, taxation, or monetary policy. “The model takes fiscal policy G and T, monetary policy M, and the price level P as exogenous.” (Mankiw, 2010) This assumption ignores micro-economics and any individual actors. 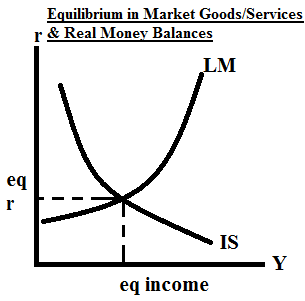 As prices are sticky the model shows the cause of a short-run change in income when the price level is fixed, or the causes for a shift in aggregate demand and changes in equilibrium, see figure below. “A model of aggregate demand that shows what determines aggregate income for a given price level by analyzing the interaction between the goods market and the money market.” (Mankiw, 2010)