Currency devaluation is a form of monetary policy in which it reduces the value of a currency with respect to those goods, services or other monetary units that the currency can be exchanged with. Currency devaluation can only be part of a hampered market with a central bank, “[since] the Bretton Woods system the US dollar served as the international reserve currency upon which all other currencies could pyramid their money and credit.” (Shostak, 2003) Under fixed exchange rates, capital outflows or trade deficits (import more than export) may lead countries to lower or abandon their fixed rate policy, resulting in a devaluation as with a freely floating standard there is no check on monetary expansion. Devaluation could be through lowering the value of a country’s currency. “Moreover, they depend on the conclusion that only one country devalues while the other countries abstain from devaluing their own currency.”  (Mises, 1949)

“Modern devaluation advocates refer to the currency’s value, or exchange ratio, in relation to all other fiat currencies [rather than that with a commodity reserve, it is inflation of the fiat-money supply].” (Barron, 2012) Generally, if a currency has a high level of inflation, its value will naturally fall against gold or foreign currencies, likely when credit expansion is used to inflate or even hyperinflation to cover a persistent budget deficit without borrowing, this may be considered a devaluation. This reason to devalue currency is for governments to repudiate their debts, at the expense of creditors, lowering the rate of interest on the domestic money market.

“The exchange value between currencies is governed by purchasing-power parity, which is the simple comparison of the price levels of two countries as expressed in local currency.” (Barron, 2012) PPP, basically a theory of foreign exchange, relates the determination of prices and coexistence of different money. “The fundamental value of the exchange rate can be described by the purchasing power parity (PPP) value […] as a measure of the equilibrium exchange rate.” (Vigfusson; Ahrens & Reitz; Manzan & Westerhoff in Maatoug, Fatnassi, & Omri, 2011)

Exchange rates explain the balance of trade between countries in that policy intrudes upon natural market forces encouraging at a certain time a country imports money and at another time exports money. A central bank can favour a high or low exchange rate at any time, or be powerless when fixing the exchange rate giving quantity of money supplied independence from interest rate prices. 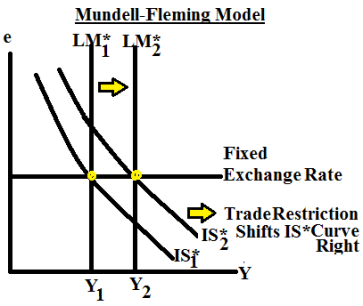 Monetary policy is used to affect the exchange rate through three paths: income, prices and interest rates. Arguments that currency devaluation is based on, is (i) to preserve nominal wage height or further increase, while real wage sinks or is unaccounted, (ii) rise commodity prices, in terms of domestic currency, (iii) favour debtors and creditors expense, (iv) promote exports retard imports, and (v) attract foreign tourists, limit immigration/tourism of country’s own citizens, by raising cost. (Mises, 1949) However, these seen effects also have unseen effects. “But [central banks] were anxious not to mention that one of the two cost items they expected to lower by devaluation was real wage rates, the other being interest stimulated on long-term business debts and the principal of such debts.” (Mises, 1949)

“[Monetary expansion leads] participants in the foreign exchange market [to sell] domestic currency in favor of other currencies, thereby leading to domestic currency depreciation.” (Shostak, 2003) As people try to rid money savers lose purchasing power and earn less interest in domestic banks and bonds. Exporters are at an advantage over importers, as less imports result from the higher cost of importing, exports are cheaper and increase, both in turn making the domestic consumer product prices inflate, while aggregate income increases and production increases. “[While, producers] now find it more attractive to boost their [exports, in] order to fund the increase in production, producers approach commercial banks, [who with more reserves] are happy to expand their credit at lower interest rates.” (Shostak, 2003)

However, again the unseen affects are not exclaimed. “The British citizen must export more British goods in order to buy that quantity of tea which he received before the devaluation for a smaller quantity of exported British goods.” (Mises in Shostak, 2003) Even though, improved competitiveness on account of currency devaluation is exclaimed of it’s benefits, its citizens are paying more for goods abroad, therefore have to cut back on consumption having less real imports for a given amount of real exports, while receiving less money for selling goods abroad. “[Getting richer] in terms of foreign currency [means] it is getting poor in terms of real wealth, [in] terms of the goods and services required for maintaining peoples’ life and well-beings.” (Shostak, 2003) Importing vital commodities (food and necessary resources) from country A to country B that are unable to be acquired by sufficient exports, makes the trade balance unfavourable. Exchange rates increase though unlike foreign exchange, commodity and services take longer to adjust prices to new money. Where commodity prices in country A during surplus production are lower by the amount of shipping cost, than during surplus consumption in country B.

“Certainly a devaluation will benefit exporters, who can expect to make more sales [whose] foreign customers get more local currency in exchange for their own [where exports] increase.” (Barron, 2012) A foreign buyer will exchange their currency to buy more goods in the country that devalued. Even though, the exporter’s sales have increased, there are unseen losses in sales taken from the importer. Where, the local currency now buys less, sales will be expected to fall as of any resulting price rises that reflect and coordinate to the reduced purchasing power. Exporters get the benefits from using new money first, and can purchase factors of production at current prices. (Barron, 2012) In the long-run the new money inflates all prices, including the cost of the exporter’s factors of production, and sales fall. “What can he do except lobby the government for another shot of monetary expansion to give his customers even more local currency with which to buy his products?” (Barron, 2012) This process derives no net benefit for the country and just lowers purchasing power. “The only reason the exporter makes more sales is that the buyer of the exporter’s goods gets a lower price [which] was not the result of manufacturing efficiencies, but of a subsidy — a transfer of wealth — from some in the exporting country to the foreign purchaser of the goods.” (Barron, 2012)

[Pursuing] devaluation as a quick and easy means to improve national competitiveness [is wrong to the extent that the] source of real competitive advantage is through [free markets/trade, property rights, limited taxation,] and encourage savings. Over time the country’s capital base in relation to its population will increase — an increase in capital per capita, as economists say — raising real prosperity through increased worker productivity. [Rather than] fomenting a “race to the bottom,” [through devaluation] by which each country tries to boost exports via competitive devaluations against all others. The nation’s capital base will slowly dwindle through the backdoor export subsidy made possible through monetary debasement. (Barron, 2012)

Expansionary monetary policy favoured by government political pressure and inadequate economic knowledge, aim for short-run economic returns of low interest and exchange rates which cause unseen effects of mal-investment, restrictions on private/foreign currencies and lower purchasing power. “”A general acceptance of the principles of the flexible standard must therefore result in a race between the nations to outbid one another [the ending] competition is the complete destruction of all nations’ monetary systems.”” (Mises in Shostak, 2003) For more on currency wars, see Jim Richards YouTube video being interviewed by the Mises Institute here.